Gun Adrian, of Sweden, has graciously shared a photo of  her tablecloth made from the Christmas Rose Wreath pattern.  Thank you, Gun!  I have included a link to her blog so you can visit her there and see what she is working on.  Click on the photo for a larger view.

Watch your speed in a construction zone!  HA!

DH & I have decided on Layout #2.  It has balance and flow (sounds like my medical report) and a pleasant distribution of color.  Now he wants me to speed thru the joining of its pieces, before a big wind might come along and swoosh them out of order!  But really I think he wants the pieces off the dining room table.  LOL

Thank you, everyone, for offering your opinions!  Don't go too far away.....I might need help with the borders. ;D
Posted by Kat Scribner at 2:13 PM 3 comments:

Yikes!  It's been a long week............busy busy busy. I have been sewing alot, just ask DH.  I had nothing to blog about - unfinished pieces everywhere! Now today we are both under the weather.  We're just lounging around, being lazy and trying not to share any germs with the general public.  You're welcome!  lol

I solicited DH to help me unjumble the parts of Carol Doak's Twisted Msytery. Many overly creative members of the group posted photos of their possible solutions - an amazing twist of ideas! So I picked a couple layouts and we assembled them on the table, which is just a little smaller than the project.  DH took photos. Oh what a help that is to be able to observe a layout from a photo.

Stay tuned for the layout options! I may need your help and have to solicit votes on the final layout plan.
Posted by Kat Scribner at 4:50 PM 1 comment:

Lots of commitments have kept me away from my Carol Doak mystery project. Today, I was able to get back to it and get clue # 5 sewn. It doesnt look that interesting, but if you could see all the other parts, they really pop, especially with the black background.

Wait until you see clue # 6, it is really colorful!  That is the last clue. I hope to make those blocks tomorrow. Then, I will be looking for some fantastic layout designs with these parts.

If you want to take part in this mystery, you will find it on Carol's yahoo group. Lots of creativity going on there:   http://groups.yahoo.com/group/CarolDoakQuiltingGroup/

I wish you all  a blessed week.  Stay tuned for the mystery unveiling!﻿
Posted by Kat Scribner at 7:24 PM 1 comment:

I have completed Clue #4 and even assembled the parts, as instructed. I think I'll backtrack some of my clues and assemble other blocks, where instructed. Initially, I thought to leave everything separated, so I could take advantage of  any design liberties which occured to me.  LOL  Now that there are so many parts, I'm feeling more comfort in putting them together. Tis the season here in the Midwest. I have definitely resorted to colors of autumn. I have a few other quilted items which would play very nicely with this project. I hope it gets finished in time.

As reality sets in, I'll be talking about doing the quilting on this project  'Next' year.  lol
Posted by Kat Scribner at 12:43 PM 1 comment:

I wish everyone in Canada a Happy Thanksgiving celebration! May you all share good times with family and friends.

I have been ever so busy here - sewing yes - but no photos to post yet! I'm hoping that tomorrow I can sew clue #4 of the twisted mystery and post a photo of that., which is not very interesting for you all, until you can see it come together as a design.

So many projects going on. How will I ever get caught up?
Posted by Kat Scribner at 8:04 PM 1 comment:

Clue # 3 ... finished already!  I didn't mean to rush, but I have other commitments for the rest of the week!  This clue needed 16 identical blocks. It is the same block pattern as in Clue #1 & 2, just some fabrics are changed and it is half the size - finishing at 3 inches. I enjoyed making it more that I enjoyed making the larger size blocks. 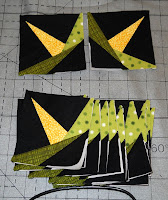 Instructions called for sewing half of the blocks into pairs.  I haven't done that yet. I like to leave my options open. Maybe I'll want to assemble it in a unique way.  I seem to be using autumn colors. I hope we're done in time to display for Thanksgiving.
Posted by Kat Scribner at 4:15 PM 4 comments:

Clue 2 is finished - 4 quarter blocks. Since they are not to be sewn together into a larger block,I suspect they will play into the outermost  corners of the quilt design.  I hope Carol surprises me anyway! 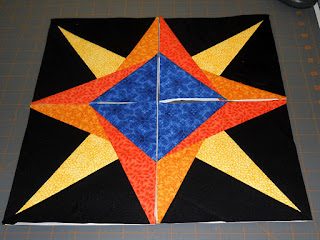 This was the same pattern as Clue 1, but there was a little color change for this block.    I wonder how exotic the next set of blocks will be?  LOL  I do wish I had selected a softer color for the background, but that is the norm for me. ...  always wonder how it would have been with other choices! 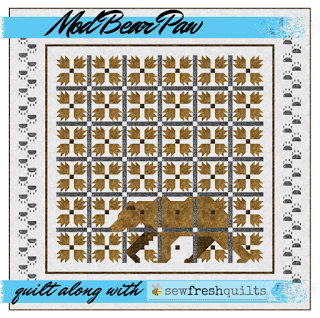 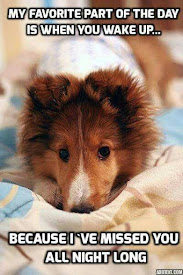 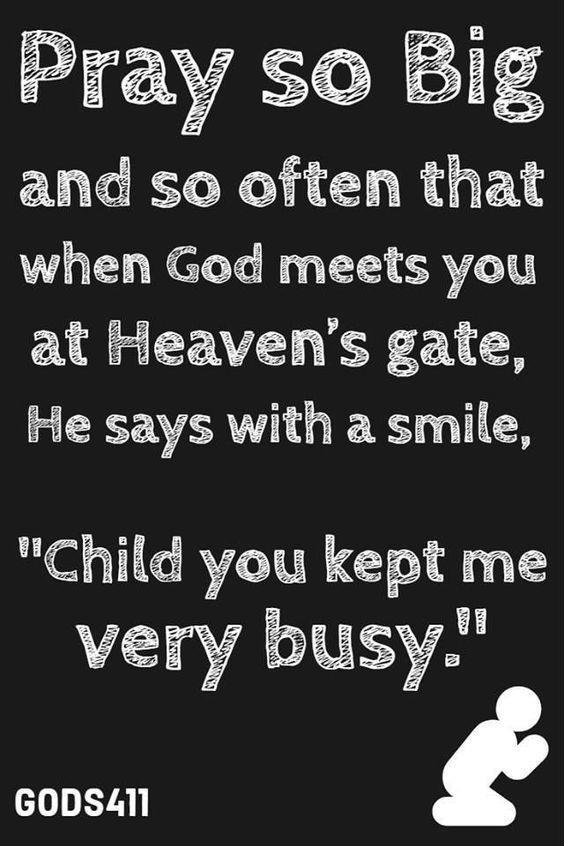 Every Day A Blessing 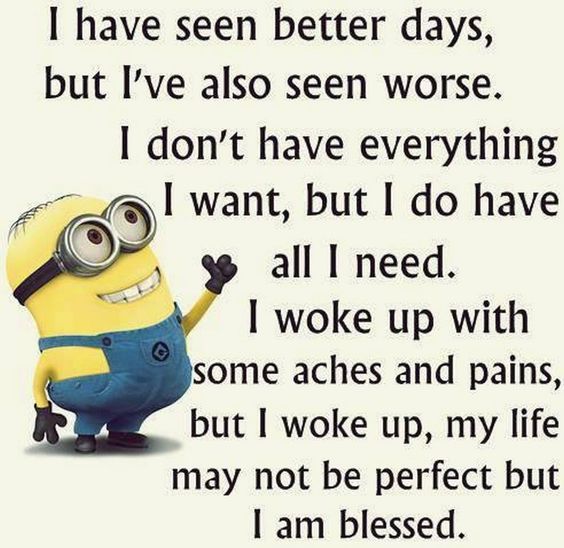 Thank You For Being My Follower